Using the number appearing from OSE as a guideline, this would represent about 180 orcs, 120 goblins, 10-20 spider riders? (the NA for black widows is 3, but that seems far too low), and 1-6 giants. However, there's no real reason this couldn't represent twice or three times those numbers. There's definitely room to use your best judgment and try to keep things proportional.

The orcs and goblins had 17 HD of units and vampire lords had 14, but they also had the highest-stat unit and 3 that didn't need to check morale.

Orcs win initiative. Goblin archers attempt to bring down the vampires' bats, since they're the only ones who can attack flyers, but miss. Bats go after the archers in retaliation, but miss too. Spider-riders hit the vampire knights, who hold morale. The vampires' archers hit the giant, who holds morale. The giant then throws a boulder at the knights, but it doesn't find purchase. Vampire knights charge the goblin archers, who manage to scramble and hide. Finally the orc footmen and skeleton hordes clash, and the orcs inflict two hits.

Orcs win initiative again. Goblin archers hit the bats once, who hold morale. Vampire knights charge the goblin archers again, inflicting a hit, but the gobbos barely hang on. Giant goes for the knights, but misses. Bats miss the goblin archers, and spider-riders miss the brigand archers. Brigand archers rain their arrows down on their goblin counterparts, and the little greenskins finally break morale, wiped out since they've lost all HD (At this point, going by the rules I laid out in the previous post, the bats should be impervious to attack, but I'm going to argue with myself and say the giant is big enough to get them so I can keep going). Orcs wipe out the remaining skeletons.

Vamps take the initiative this time. Brigands loose on the giant, missing with both attacks. The giant swats the bats out of the sky, wiping them out. Knights tilt at the giant, missing. Spider-riders scurry for the brigand archers, but can't inflict a hit. Orc footmen overrun the brigands, hitting, but the archers hold formation.

Orcs regain the initiative. Giant misses the knights, knights miss the giant, spider-riders pull off a coup and hit the knights. Those pesky vamps hold morale. Brigand archers miss the giant. Orc footmen smash the rest of the archers.

Vampires take the initiative, and with only the vampire knights remaining they manage to throw the orc footmen into disarray with a hit. Giant misses the knights, but spiders hit. High morale keeps the vampires hanging on.

Vampires hold the initiative, and with a well-timed charge they force the giant into disarray. However, the spider-riders countercharge, sending the vamp knights into disarray. Orc footmen manage to reform their ranks.

Vampires keep the initiative, manage to pull themselves together, and hit the spiders, who are thrown into disarray. The giant can't pull it back together. Orcs can't attack the mounted knights, since the knights are cavalry and too fast for the footmen.

Vampires manage to keep the initiative yet again and rout the spiders, pushing them off the field. Since the remaining orc footmen cannot attack the knights, they just hurl insults at them. The giant can attack the knights...but misses.

Vampires keep the initiative and I start to wonder if Google's dice roller is broken. The knights hit the giant, sending it into disarray. Since the orcs can't attack, they decide to quit the field. The vampires have won, but at a great material cost. 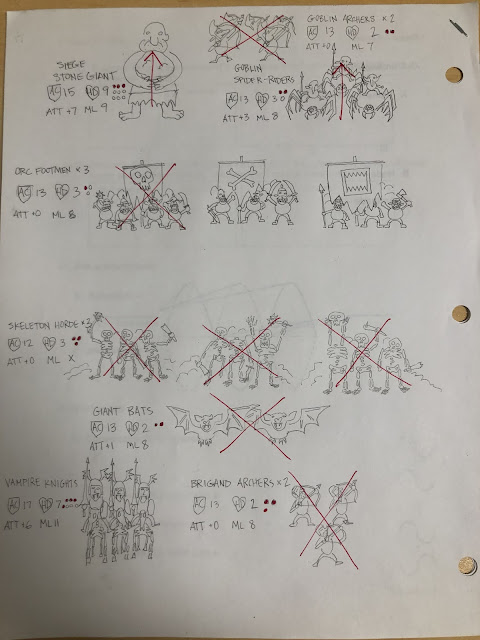 Overall, though, this does seem to hang together. I have a campaign now in its 6th year where things have moved pretty far into domain-level play, and the players barely use their character sheets anymore. I'll probably use this system with them before too long and try to refine it further. Some next steps: codifying magic some more, dealing with fortifications, and stuff like ambushes/surprise attacks.
Posted by Matt Strom at 1:11 PM