New Map of the Elf Empire and Southern Isles

I’ve been having fun developing a new map-drawing style that I think is finally reaching a certain level of maturity. And yeah, it owes a lot to Matthew Adams, a guy who has become as inspirational to me as artists like John Blanche or Moebius. This will be an in-game map belonging to a particularly savvy current traveling companion of my party.

And hey, if you have any maps you want drawn for personal or published projects, I’m feeling competent enough to take on commissions. I’d like to make some money for better art supplies. Get in touch at m.cliffstrom at g mail. I don’t have a ton of time, so I’ll probably only take on projects that inspire me. 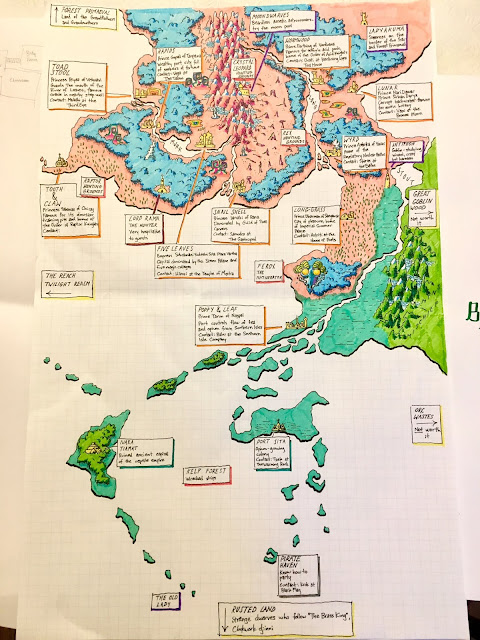 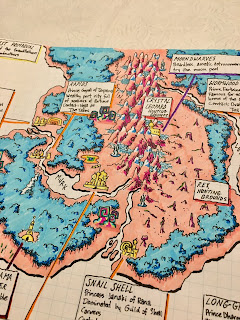 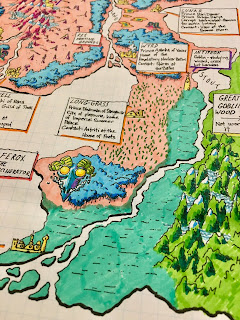 And experimenting with a different watercolor style for a very different project: 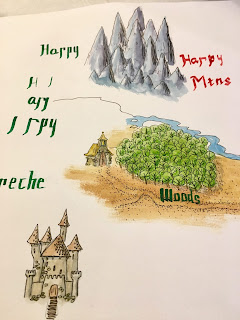 Am I the Only One Who Hates Actual Play Shows?

I have an strained relationship with actual-play D&D streams, podcasts, etc. I'm very glad they exist. More than one of my players actually got interested in playing through the Adventure Zone. And I know from running a D&D club at the school where I teach that real-life kids listen to them. I feel about as sure as I am about anything that they are a big reason for the long-overdue coming out party that the tabletop RPG scene has enjoyed in the past few years.

I also can't stand them. I have tried many, from Critical Role to the more obscure OSR groups, and they absolutely cannot hold my attention. I can't even get into the Adventure Zone, and I love their other podcast. I don't even really know why I don't like them. It may have something to do with the fact that I'm not invested in the same way as when I'm playing, or maybe I don't like to see DMs making choices I wouldn't make.

But I want to like them. I really do. Do I have to make one to find one that I like? I fucking hope not. I couldn't see myself putting in the effort. Still, I have some ideas of things I'd like to see in something like this:

This system is basically an unholy hybrid of Into the Odd and a few of my previous experiments here and here.

Design goals:
It's not quite as elegant as I would like (the way you use the injury chart for ranged weapons is particularly clumsy), but overall, how did I do? Any glaring oversights?

Roll 3d6 each for Strength, Dexterity, and Willpower. Saves and non-combat skill checks are roll under these stats. Each level, try to roll over each on 3d6 to increase them by one.


Consult this table for Weapon Skill:

(The charts kinda got fucked up, but hopefully they're readable.)

Choose equipment according to your preferred method or roll on an Into the Odd-style starting package chart.

Combatants make opposing d10 rolls. If they have equal Weapon Skills, they each roll one die. If one combatant has a higher Weapon Skill, he or she rolls one more die. If one combatant has at least twice the Weapon Skill of the other, he or she rolls two more dice. During the first round of engagement, the combatant with the highest-reach weapon adds another die to his or her roll, but after that (until they disengage) the combatant with the highest-speed weapon adds another instead. Compare the two combatants’ highest rolls, and use the difference between them to consult the Injury Chart for the low roller.

In cases where the width of the fighting area is less than the length of a weapon extended from the body (use your best judgment), its reach bonus during the first round of engagement does not apply.

If combatants fight in a line, any reach bonus from their weapons continues to apply after the first round of engagement, except on either end of the line.

The shooter rolls a d10 and hits the target if he or she rolls equal to or under his or her Weapon Skill. If the intended target moved in the previous round, the shooter rolls two dice and uses the higher result. If the shooter spent at least one previous round doing nothing but aiming at a stationary target, he or she rolls two dice and chooses the lower result. If the shooter hits, subtract the lowest roll from 10 and consult the Injury Chart.

Longbows, crossbows, maces, and lances from horseback reduce the effectiveness of armor by one point.

Instead of consulting the injury chart as normal, combatants may aim for a specific injury. In that case, consult the Injury table’s “Called Shot Dice” column. In the case of hand to hand combat, the defender of the called shot rolls that many extra dice. In the case of ranged combat, the shooter rolls that many extra dice and chooses the highest roll. If the attacker still succeeds, the desired injury takes effect.

Email ThisBlogThis!Share to TwitterShare to FacebookShare to Pinterest
Labels: combat, Into the Odd, rules

Ok how about this one?

Instead of attack bonus, characters have a Weapon Skill (thanks Warhammer) equal to Str + Dex modifiers (and Fighters add their level).

Weapons don't have damage ratings anymore, but instead have Reach and Speed:

A simple heraldry generator in Abulafia format. Click the button, and the full text of the generator is below.