I'm running a LotFP campaign set in the Balkans a little while after the reign of Vlad Tepes. I want to invoke the feeling of black and white monster movies (Nosferatu, Frankenstein) but mostly with novel, unfamiliar monsters in the Flame Princess tradition (though Voivodja is out there for the players to find in all its vampiric glory). I put together an inspiration generator to quickly produce creatures that seem like movie monsters pulled from folklore but slightly askew.

Thinking about real animals that freak people out, I developed a pet theory that they can be categorized into four modes of creepy behavior: crawling, slithering, swarming, and stalking. So that's the first step:

Then you roll an inspiration creature, taking the inspiration as literally or figuratively as you like:

Then determine the creature's M.O:

d20 (roll 1-2 times):
1. feeds on body fluids
2. it follows, like It Follows
3. feeds on fear
4. infiltrates dreams
5. hypnotizes/charms
6. loves (and is immune to) poison
7. hates (and is immune to at least some) magic
8. radiates hallucinations
9. causes plants to wilt
10. is radioactive
11. exists outside space-time
12. is the result of an ancient curse
13. feeds on madness
14. is the result of man's folly
15. feeds on hedonism
16. has one form in the day and another at night
17. is from hell or the nether regions of the earth
18. desires power over men
19. is a summoned servant
20. wants to eradicate men

Then I cheat by rolling on the d100 Guest Attributes and Powers tables on pp. 49 and 50 of A Red & Pleasant Land. The tables are there and great so I'm gonna use them, dammit.

It's fast because you can roll all the dice at once or click here (only 10 entries from the R&PL tables are given in the online generator because I got tired of typing) and produces a fairly complete piece of inspiration that works for me. So it meets the Cardinal Rule of generators by being faster than making it up from scratch.

I would then recommend drawing the generated creature and statting it right on the drawing, like so. Ideally, there should be something both human and inhuman about the creature. 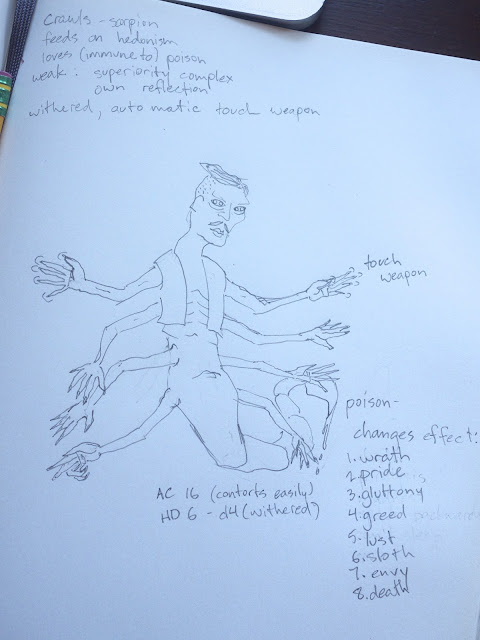 You could probably put together the best DMG ever using only blog posts and other free internet things. Here's an index of freely available DM advice and resources that have been invaluable to me as I wade back into the game after years away. It's by no means exhaustive, and I'll keep it updated as I find more stuff.

Hexenbracken
The Kraal
Colossal Wastes of Zhaar
(All hosted on Save vs. Total Party Kill)

I redid the LotFP weapons list with variable modifiers to ATTACK based on opponent armor for this new combat system. Seems fairly balanced - marginal bonuses for all weapons are 0 or +1. Median bonus for an unarmored opponent is +2, 0 for both leather and chain, and -1 for plate.


*Requires a successful grapple to do damage.
**Hit opponent must succeed in a TRAPS save or be caught.
†Two-handed.
Posted by Matt Strom at 10:50 AM No comments:

At a certain level of minutiae, changing rules doesn't matter all that much. As long as they cover playing with swords, casting spells, and exploring a deep, dark place in a semi-simulationist way, it's going to feel like D&D. With rules, familiarity trumps all else, followed by straightforward use. Realistic simulation doesn't rank all that high with me as long as some common sense is evident. Changing rules for "realism" is like rearranging deck chairs on the Titanic, if the Titanic were a fun game you played with friends. Actually, the Titanic would be a fun game to play with friends.

That being said, I watched a few videos on European martial arts and historical dueling, and this combat system came to me fully formed in about a half hour of distracted thinking this morning. So I might as well write it down.

Base rules are LotFP, with the following changes:

STAMINA is the number of rounds you can fight normally. 7 + BODY + class modifier. Every five rounds after that, you take a cumulative -2 penalty to both ATTACK and AC. Class modifiers: goes up by 1 every 3 levels for Fighters and Dwarves, every 4 levels for Thieves and Elves, and every 5 levels for Clerics, Magic Users, and Halflings.

ATTACK: +1, goes up by 1 per level for Fighters only. All weapons do d6 damage per hit, but provide additional ATTACK modifiers dependent on the opponents' armor:

Combat options are Parry, Press, and Defensive, as per LotFP. Shields are offensive weapons, not defensive. They reduce the AC penalty for Press to -2, but take up two slots of equipment or reduce stamina by 1. You choose.

Keeping track of STAMINA and four different numbers for each weapon might be too cumbersome at the table. There's no BODY-based save, because I didn't want to give one stat too many benefits, so it's not clear where poison or disease saves would go. I'm inclined to go with TRICKS, but I couldn't give you a good reason why. FINESSE is an awkward word next to BODY, MIND, and SPIRIT. I wanted to go with "speed", but that would imply that it affects how fast you move, which it doesn't.

I might playtest this, I might not. Coming up with cool shit to throw at players is always more exciting than fiddling with rules.

Here's a rough character sheet, without skills or magic: 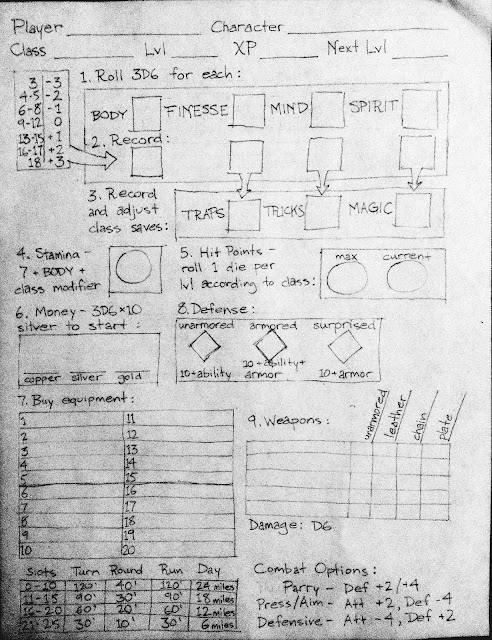