Yoon-Suin, Red & Pleasant Land, and Deep Carbon Observatory Made Me Start a Band 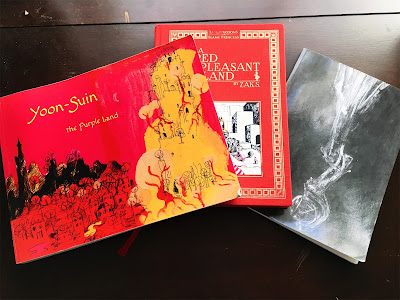 “I was talking to Lou Reed the other day, and he said that the first Velvet Underground record sold only 30,000 copies in its first five years. Yet, that was an enormously important record for so many people. I think everyone who bought one of those 30,000 copies started a band!"


Good bands make you listen; great bands make you play. It takes more than great music, though. There's lots of great music out there that didn't start a movement the same way the Velvet Underground did. There's a raw, ramshackle DIY quality to a Velvet record, especially the first, where they're clearly disregarding the rules in a way that gives it life and invites you in. "You can do this shit too, and you can do it your way."

My way into the OSR was through +Jack McNamee's Rotten Pulp. I'd been away from D&D for over a decade, since early high school. The daily grind of a science PhD coupled with friend/girlfriend interest eventually made me decide to put some make-believe back in my life, so I started looking around and discovered two new editions had been published since the 3rd edition of my youth.

Fifth edition seemed to clear off the crust of prestige classes and other things that meant your character could be better if you bought more books, which I liked. I also had this idea that I wanted to run some old-fashioned adventure modules, so I was on the lookout for those too. This was around April 2015. I tried to find the original internet path that brought me to Rotten Pulp, but Safari only seems to keep my browsing history for a year (a year ago today, I was searching "mad max iphone 6 case"). I think I was looking for ways to simplify 5th edition character creation and found this post. Maybe.

Before long, I was reading about horror in games, negadungeons, hirelings, random tables, and something called Death Frost Doom. Mostly what I found was someone thinking deeply about this silly game in a way that went well beyond challenge ratings and encounter balance. Down the blogroll rabbit hole I went.

The sense of wonder and discovery was intoxicating in those heady days when I didn't know what any of this really meant. I bought Yoon-Suin by +David McGrogan within ten minutes of discovering it based on the brief description and +Matthew Adams's art. I thought Zak Smith looked like James Raggi for a long time because Zak had a picture of him holding up A Red & Pleasant Land on the side of his blog.

Over the next few months I read blog after blog and began to incorporate the ideas I found into the campaign I'd begun based on what I remembered of 3rd edition. Yoon-Suin infected the vanilla elven empire that was my game's main setting, twisting it into something much more strange and wonderful. Eventually I added Deep Carbon Observatory by +Patrick Stuart and +Scrap Princess and A Red & Pleasant Land by +Zak Sabbath to my arsenal, and the game world hasn't been the same since.

I've heard the above Eno quote also said about the New York Dolls and the Sex Pistols. In my current game life, the three books I've mentioned are my Velvet Underground, New York Dolls, and Sex Pistols. They informed my sensibilities and eventually made me start this blog. Apologies to the authors if you don't like the bands I'm comparing you to, but it's my blog after all, so tough. Compare yourself to ABBA on your own damn time.

Yoon-Suin is clearly the Velvet Underground - just exchange the heroin for tea and opium and put John Cale's droning viola in the hands of a Hundred Kingdoms fakir. To me, the Velvet Underground were always about a kind of laconic but dangerous beauty. Life comes easy, but so does death and everyone's an addict anyway. That's a pretty good description of the Yellow City. The deep melancholy of Nico's voice evokes the tragedy of beautiful Syr Darya populated by half-men. The hypnotic groove of a song like Sister Ray gives the feeling I want to convey to players traveling in Lamarakh or the Mountains of the Moon.

The lipstick-coated menace and overgrown palace of R&PL just scream the New York Dolls and 70s NYC. There's a thin veneer of glamour to both that masks the violence beneath. The New York Dolls were about saying fuck you to the horror of living amongst decay; R&PL is the same. Both Voivodja and the USA circa 1973 are slow-motion nonsense apocalypses catalyzed by a disconnect from the value of human life. This is almost literal: 1973, in addition to birthing the Dolls, is cited by economists as the year wages stopped tracking productivity and flatlined. Not as bad as everyone turning into vampires, I guess, but at least you can kill the vampires and take their (very nice) stuff. You can't stake late stage capitalism with a misericorde.

DCO is the Sex Pistols for its very British brand of contempt for The Way It's Done. Sure, I'll give you a dungeon, but you'll do it in reverse and oh, you passed the treasure in the mud on the way here. And who guards the cramped tunnels of the observatory? A fucking giant, that's who. I'll see your Saruman the White and Elric of Melniboné and raise you a Snail-Shell Zarathusa. The desperation and grubbiness of the adventure recall basement shows in abandoned houses - Carrowmore barely holding it together, the dying turbine golems (representing the now-silent factories of England, eh Patrick? Eh?), the showdown between the Kapeks and the Reed People amongst the filth of their dry lake. Scrap Princess's rip-it-up-and-start-again frenetic energy is the perfect complement. Hell, Hoolloch by Frosen even looks like Sid Vicious.
SaveSave
SaveSave
Posted by Matt Strom at 12:17 PM No comments: