Evisceration in the Everglades 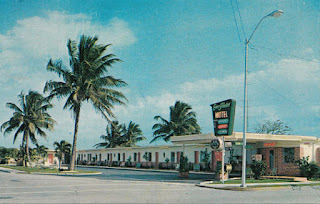 I've discovered that thin slasher movie premises make great setups for one-shot games. To wit:
It is 198X and the players are guests at Gator Gretchen’s Motor Inn, a motel and rundown former resort in the Florida Everglades. Despite its condition, it still attracts National Parks enthusiasts, birdwatchers, Skunk Ape cryptozoologists, and people trying to do a Florida beach vacation on the cheap by staying inland. This is who else is there:


“Gator” Gretchen McHenry - The owner, who bought the condemned Everglades Resort and turned it into a cheap motel, complete with animated alligator neon sign. An inveterate hustler and loudmouth. (Str 8 Dex 13 Wil 10 Stamina 4)
Alcide Martin - Classically-trained Cajun chef who does great French and Cajun cuisine, but awful at the American staples he mostly has to cook here. (Str 7 Dex 15 Wil 13 Stamina 4)
Florence Holmes - Kindly old housekeeper. Actually the daughter of the previous owners from when this was the gilded age Everglades Resort. They used it as an H. H. Holmes-style murder palace to kill wealthy guests during the Great Depression. She is appalled at what the place has become, and wants revenge. (Str 6 Dex 6 Wil 18 Stamina 2)
The D'Amico Family - Father Jack, a NYPD officer, mother Diane, and son Kevin, a family sick of each other after the drive down from New York City. (Jack Str16 Dex 11 Wil 9 Stamina 2, Diane Str 11 Dex 13 Wil 12 Stamina 2, Kevin Str 9 Dex 6 Wil 12 Stamina 6)
Barbara James and Ernie Hubbard - The Jacksonville chapter of the American Cryptozoological Society, down for a skunk ape hunt. They teach at the same high school. Actually, only Barbara cares about the skunk ape. Ernie secretly doesn't believe in it. He's in love with her and feigns interest to spend time with her away from his wife. She has no idea. (Both Str 10 Dex 10 Wil 10 Stamina 3)
Fred Nerk (Holmes) - Supposedly an Australian on a sport fishing holiday, but actually Florence's son. He's a tank of a man and will do her bidding. (Str 18 Dex 6 Wil 18 Stamina 6) 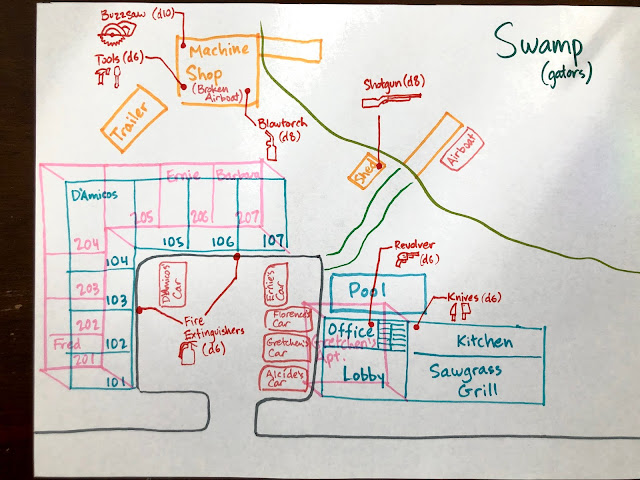 Chronology of the night if the players do nothing:
6 pm: Gator Gretchen checks guests in and informs them that the next bus will be noon the next day.
6:30 pm: Guests gather in the Sawgrass Grill for dinner.
7 pm: Alcide happens to recognize Florence in an old staff photo in the restaurant for the first time, and calls her over to show her.
8 pm: Florence orders Fred to kill Alcide when he takes the trash out in the back. He is found floating in the pool 15 minutes later by Barbara, mangled, arm nearly ripped from his body. Barbara and Ernie think it's the skunk ape and go to get their cryptozoology gear.
9 pm: Barbara finds Fred in the machine shop behind the motel cleaning blood off himself. He kills her. She is discovered by Ernie, who loses it and admits he was only there because he was in love with her. Fred removes the spark plugs from all cars in the lot.
10 pm: Florence lures Gretchen into the basement of the main building and kills her. Fred sets fire to the D'Amicos' room. Trails of gasoline lead back to his car.
10:30 pm onward: Florence and Fred try to start picking off the players one by one. 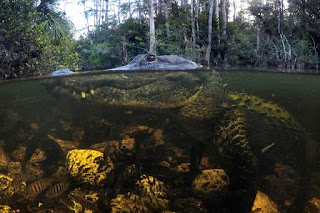 I used Into the Odd (free preview here) for the rules framework. At this point, I can't imagine myself using any other system for one-shot games. It's my go-to for tight, minimal, easily-adaptable rules. Here are my modifications for running a horror game:
If you want to run a game like this, all you really need is a thin premise, a cast of colorful characters to kill off first, a timeline of events, and a map with goodies stashed around it. A soundtrack helps, too. I made a pretty sweet Spotify playlist, if I do say so myself. 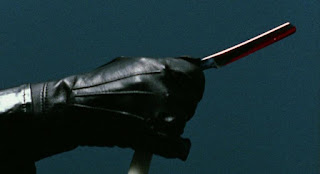