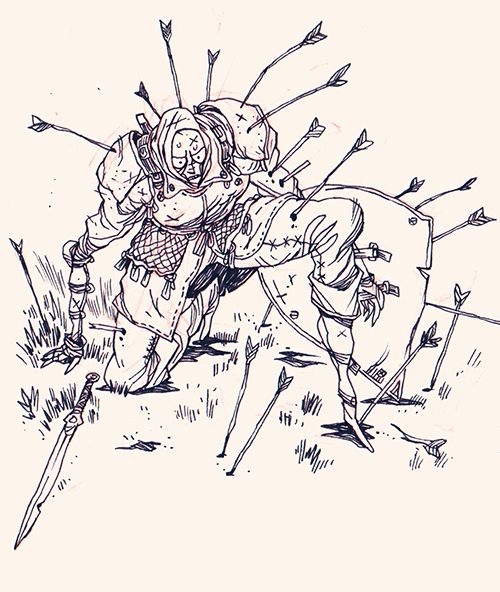 Since September, I've been looking down the barrel of an hour-plus commute five days a week. It's a major bummer. The one silver lining is that it gives me plenty of time to daydream when I should be paying attention to the road.

On Friday, I was thinking about hit points and combat in D&D (LotFP is my flavor of choice). It exists in this nebulous space where one d20 roll is not necessarily one swing of the sword, but could be a series of successful moves that wears down the opponent's stamina (thinking of HP as stamina has actually really helped me to conceptualize it, I think). In practice, though, it's often more dramatic and just plain easier to narrate the combat as though it were blow-by-blow. Sometimes, that makes it feel like lumbering battleships trading salvoes and doing unspecified "damage" until one finally sinks.

This is the one major disadvantage of the HP system, at least at my table. It abstracts combat to the point where hits have no concrete effect until 0 HP, and I have to do a little bit of on-the-spot adjudication every time a player wants to do something more specific than just "I attack".

What could a slightly more granular, HP-less D&D combat system look like? I've always liked the optional rules for dueling in A Red & Pleasant Land (p. 143). They're designed to add depth to one-on-one fights. Essentially, a dueler rolls on a short d6 injury table for every hit taken after reaching 0 HP. Once they roll the same injury twice, the dueler is either dead or unconscious (that's why the table is short).

I've used injury tables like this before. But what if we took HP out entirely and skipped right to the table? It could go something like this:

So, you'd roll to hit vs. AC as normal, but instead of rolling damage, you'd roll d10 to determine where you hit. Defenders would keep track of how many times that body part has been hit and apply the mechanical effects as they come up. If the attacker wants to hit a specific body part, the defender gets to add the indicated called shot bonus to AC.

Without HP increases to make higher-level characters more survivable in combat, you'd need to increase base AC instead. Fighters and dwarves would go up 1 AC every two levels; clerics, elves, and thieves would go up every three; and magic-users and halflings every four.

This system would make combat short and brutal, which would work for some games but not others. It would require a bit of a different mindset than D&D combat as usual - mindless hack-and-slash without a plan is going to result in a lot of dead PCs. Also, you'd have to modify the table for non-humanoid creatures. Bespoke tables for each creature would help make fighting them feel unique, but it's a lot more work than just rolling up HP.
SaveSave
Posted by Matt Strom at 10:13 AM 3 comments: 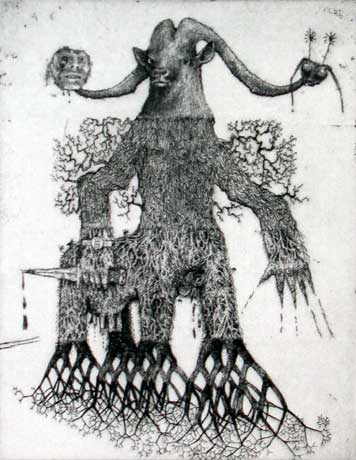 Use these when you want to make monsters tougher without resorting to upping their HP, AC, or damage. These aren't the weirdest powers I can think of - I've left them relatively "standard" so they can be broadly applicable. Combine with this d50 Puzzle Monster Death Requirements table to make a d100 table.

Posted by Matt Strom at 3:29 PM No comments: